Before I share some of my activities from January you may remember that parliament was recalled between Christmas and New Year to approve the UK government’s Brexit deal.  In my New Years’ Day column in the Edinburgh Evening News, I was very clear that this is a bad deal – one that will make us poorer and more isolated in the world. And, as I pointed out in the Business Questions that took place on 30th December, the Tories were hoping Covid-19 and Christmas would provide a smokescreen but this deal will continue to haunt them as Scotland demands the right to do better.

So far it’s clear that, despite avoiding a no deal exit, leaving the EU has made things worse, not better. Scottish seafood, in particular, has faced devastating challenges in exporting their produce to Europe – making it all the more concerning when we hear that the Fisheries Minister has admitted to not even having read the trade deal!

As the new restrictions came into force, parliament finally caught up with the rest of the country… well, sort of. They have stopped some debates in Westminster and cut back the times when MPs have to attend in person. They have finally allowed MPs to take part in debates remotely by computer. But they still haven’t gone far enough. We have, for instance, a perfectly good system for voting online which the government refuse to switch back on. As I said during the recent debate on how parliament should work during the Covid crisis, technology allows us to fulfil our legal and democratic mandates from a safe distance.  See what I had to say here.

Restrictions have been in place for ten months now. For far too many that is ten months of absolutely no UK government support. I’m a member of the All-Party Parliamentary Group on Gaps in Support which is challenging the UK government on this. Earlier in the month I also specifically raised with Rishi Sunak, the cases of those who were newly self-employed – urging him to act now. 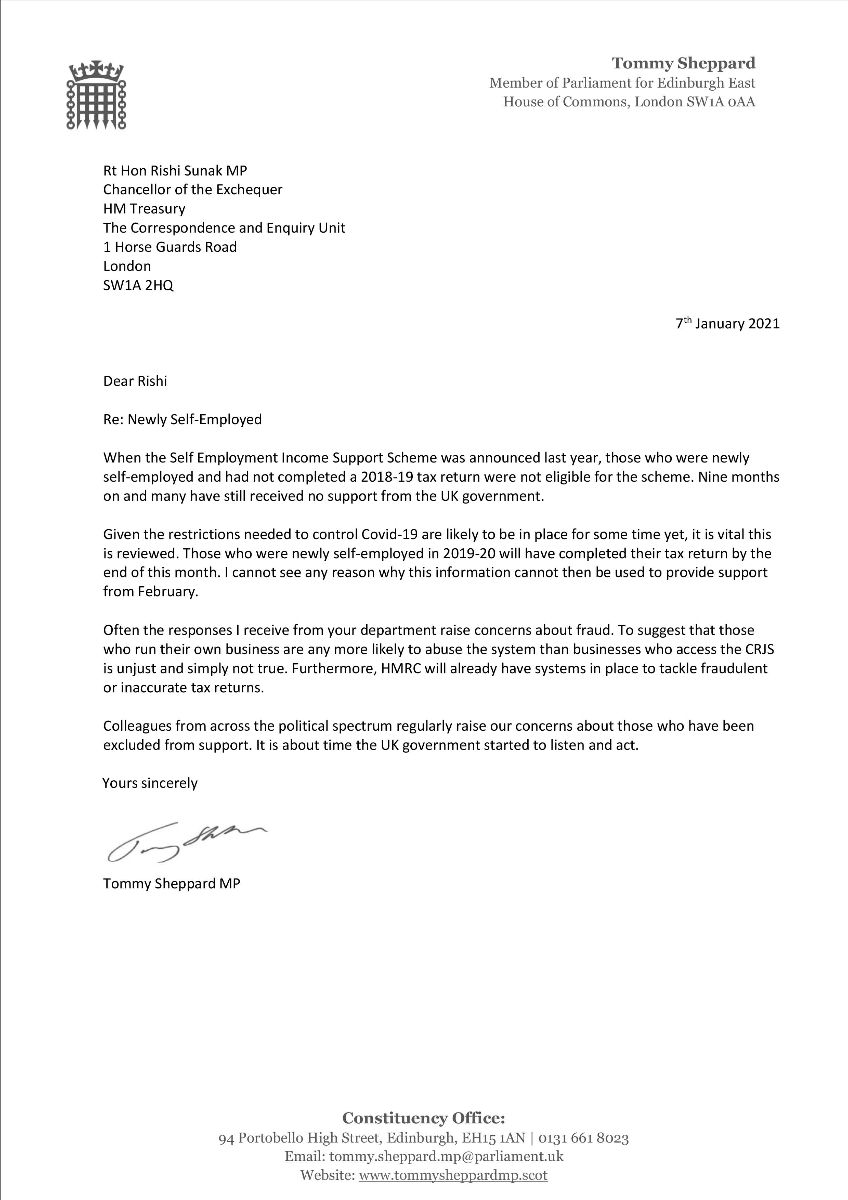 My weekly exchanges with Jacob Rees-Mogg continue. I’m still trying to get the Leader of the House to say whether the UK  will respect the results of the upcoming Scottish election if people in Scotland want to decide their own future. I’m sure you can guess how that’s going. Instead he seems to just want to make jokes about fish, totally undermining how serious some of these issues are. You can watch one of these exchanges below and see more on my YouTube channel.

Lots of constituents contacted me this month about the Labour Party debate on the £20 uplift to Universal Credit (UC). It won’t surprise you that my colleagues and I in the SNP voted for this, having repeatedly called on the UK government to make permanent the £20 uplift to UC and Working Tax Credit, and also to extend an equivalent uplift to legacy benefits. On 27th October 2020, the SNP Scottish government wrote to the UK government urging them to implement these measures. However, their response made no commitment to take this forward now, when it is most needed.

The UK government’s reassurance that the £20 uplift will stay in place until ‘at least’ April 2021 is simply not good enough; people need confirmation that it will be made permanent. Instead they are now facing a cliff edge in April because the UK government has failed to act and, as usual, has let this issue run on into the eleventh hour.

My colleague, Pete Wishart, secured an urgent question on visa free access for musicians and artists now that the UK has left the EU – something a number of constituents are concerned about. It’s another impact of Brexit that Scotland didn’t vote for and that will impact performers and impact festivals. You can watch my question below:

Regular readers may recall that last year I introduced a Ten Minute Rule Bill on Problem Drug Use. While parliamentary sittings for Private Members’ Bills have been suspended due to Covid, I am continuing with this work – liaising with campaigners, organisations and other politicians and hope to publish the text of such a bill shortly. One such campaigner who I met with this month is Peter Krykant. Peter opened Scotland’s first Overdose Prevention Facility in Glasgow. This year marks the 50th anniversary of the Misuse of Drugs Act – it is long overdue reform.

The First Minister made a statement on drugs policy and tackling the drugs death crisis which I very much welcomed. She was clear that harm reduction and treatment are important – we need to keep people alive so they can access the help they need. You can watch her statement here.

Last week the Prime Minister decided to visit Scotland. In normal times, I would welcome him here with open arms as every time it boosts support for independence. But his recent visit was in no way essential and it undermines the public health message. You can see me raise this at Business Questions below.